The Race For the Sky

Who would build the world’s tallest building – the powerful Bank of Manhattan Trust Company down on Wall Street or Walter P. Chrysler, the automobile tycoon up on 42nd Street? It was early 1929, and a race for the sky raged in New York City. In late summer, the newspapers reported that the bank soared to 973 feet, just two feet higher than planned for the Chrysler Building. To the king of cars this was intolerable, so he turned to his architect, William Van Alen, who decided to outfox the competition.

Five months later, people in New York were treated to an extraordinary sight. In 90 minutes, a splendid tower, topped by a silvery spire, with triangular windows, emerged from the building’s open roof. Secretly assembled in the fire shaft, it rose to a height of 1,046 feet, making the Chrysler Building the world’s tallest building.

Van Alen had given Chrysler a structure that not only scraped the sky, he also, most imaginatively, used details of cars as decorations. Near the top of the building perched eight eagle-headed gargoyles, based on the hood ornament of a 1929 Chrysler Plymouth.  Thirty-six stories above the street, there’s a wrap-around frieze of stylized cars featuring real metal hubcaps and four giant radiator caps.

For a few months, until the Empire State Building took over as the world’s tallest building, Chrysler relished his number one status. His lavish apartment was near the top, and he boasted to friends and foes alike that he had the highest toilet in the city. So there he sat, on his porcelain throne, delighting in his elevated position.

Chrysler and Van Alen expected rave reviews when the building was completed, but that didn’t happen. “The height of commercial swank,” sneered The New York Times. “Stunt design, with no serious significance,” sniffed The New Yorker, and another newspaper accused the spire of having the “appearance of an uplifted swordfish.”

But things change. Now some 75 years later, the Chrysler Building is many people’s favorite skyscraper, and recognized as an outstanding example of Art Deco, the style of the twenties and thirties. Above all, there’s that incomparable swordfish-nose spire.

It was Van Alen’s aim to have the triangular windows lit up at night. And now, long after his death, they do, launching the Chrysler Building into the Manhattan sky with all the fantasy and glitter of the Jazz Age. 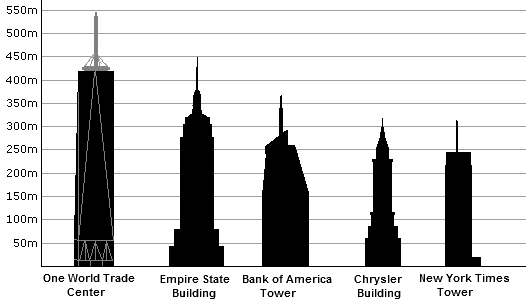 The Chrysler Building has lost the race as the tallest building in New York City — although it is still right up there:) Note that the heights in this chart are expressed in meters which means that you have some math to do in order to compare the other buildings to Chrysler’s 1,046 feet. 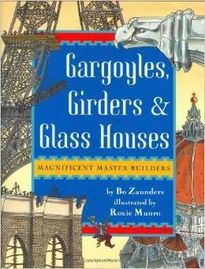 Roxie Munro is not only an author, but she is also an illustrator.
She did the art for Gargoyles, Girders & Glass Houses by Bo Zaunders, a superb picture book tribute to seven of history’s most celebrated architectural wonder-workers; It takes readers from the domes of Florence to the mosques of Turkey, from the Eiffel Tower to the Chrysler Building. Stunning illustrations and lively text evoke the passion and genius of builders whose inspiring work spans five centuries and six countries.  For more information, click here.
MLA 8 Citation
Munro, Roxie. “The Race for the Sky.” Nonfiction Minute, iNK Think Tank, 5 Dec. 2017, www.nonfictionminute.org/ The-Race-For-The-Sky.